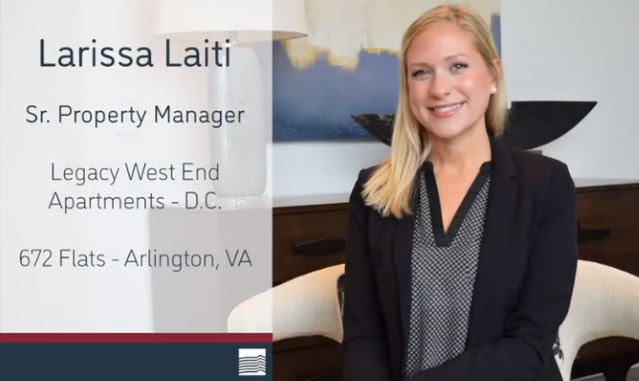 MCLEAN, Va., Aug. 2, 2019 -- Larissa Laiti, Senior Property Manager at KETTLER, has made the 30 Under 30 List for the Institute of Real Estate Management (IREM). Larissa has led two of KETTLER’s most successful and high profile lease-ups with Solaire Bethesda and Legacy West End.

Larissa began her career with KETTLER on the Manager in Development track where she gained experience at various properties in several different markets. She was hired as an Assistant Property Manager and was quickly promoted to Property Manager of a Class-A lease-up in Bethesda, Maryland. She was instrumental in leading the property to reach stabilization in twelve months. She was promoted again to a flagship lease-up (Legacy West End, in Washington, D.C.) where she achieved $4.65 per square foot rents while reaching 95% leased in nine months.

In her new role as Senior Property Manager, Larissa has added an additional lease-up community to her portfolio: 672 Flats in Ballston, VA.

Larissa is part of the KETTLER Property Manager Mentor Program and serves on the KETTLER Management Advisory Council, which advises on the development and implementation of company policy, software selection, and philanthropic efforts. She completed her ARM certification with KETTLER and is currently working on her CPM candidacy. Larissa graduated from The Virginia Tech Pamplin College of Business with a minor in Residential Property Management.

The IREM 30 Under 30 program recognizes 30 exceptional professionals under the age of 30 who are the next generation of leaders who have already made a significant impact on the industry and in their communities. Their various contributions to the profession are demonstrated through career success, professional leadership, and community involvement.