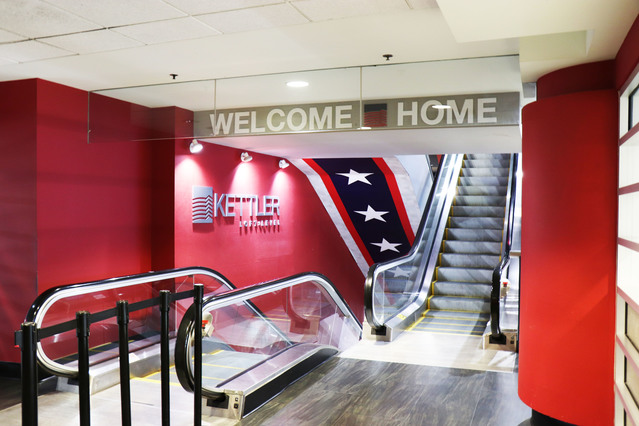 WASHINGTON, D.C., Aug. 1, 2018 – Monumental Sports & Entertainment announced today it has reached a multi-year agreement with KETTLER, which includes the full naming rights of the 200-level at the newly renovated Capital One Arena. This would make the 2nd floor of the arena the KETTLER Loft Level for the 2018-19 event season, and beyond. Under the agreement, KETTLER also becomes a “Championship Level Partner.” Terms of the agreement were not made public.

Robert C. Kettler, CEO of KETTLER, called the partnership an “expansion of our long-standing relationship with Monumental Sports & Entertainment and its ownership.”

“It marks a new chapter in a relationship we have maintained for more than a dozen years as the sponsor of the KETTLER Capitals Iceplex,” Kettler said. “Now, we are excited to move into the main arena.”

The agreement calls for KETTLER to sponsor the second level, or 200-level, of the Capital One Arena, which is undergoing a $40 million renovation. Other elements to the agreement include brand integration during Washington Capitals and Wizards games as well as an integrative radio partnership, digital billboard advertising opportunities, and exciting experiential opportunities for KETTLER partners and apartment residents.

The move will enable KETTLER to reach a broad demographic of people who attend Capitals hockey games, Wizards and Mystics basketball games, and arena football games with the Washington Valor and Baltimore Brigade, along with all other concerts, sports and entertainment events at the arena. The main escalators in the arena at the second-level loft, for example, will carry KETTLER branding and its familiar tagline: “Inspiration. From the Ground Up.”

“Washington is our hometown,” Kettler said. “We are proud to provide apartments, condominiums, townhomes, and entire mixed-use communities for residents in the greater Washington, D.C. region. This sponsorship not only underscores our commitment to the Washington region but to all of the Monumental Sports Teams.”

Monumental Sports & Entertainment (MSE), located in Washington, D.C., is one of the largest integrated sports and entertainment companies in the country with one of the most diverse partnership groups in all of sports. MSE owns and operates seven professional sports teams: the AFL’s Baltimore Brigade and Washington Valor, NBA's Washington Wizards, NBA G League’s Capital City Go-Go, NBA 2K League’s Wizards District Gaming, NHL's Washington Capitals and the WNBA's Washington Mystics. The company is also co-owner of aXiomatic, which has controlling interest in global esports franchise Team Liquid, and owns and operates Capital One Arena in Washington, D.C. Monumental Sports & Entertainment also manages Capitals Iceplex, the state-of-the-art training facility for the Capitals and EagleBank Arena on George Mason University's campus. The District of Columbia and Events DC are building a new sports and entertainment facility in Southeast DC on the St. Elizabeth’s East campus. The facility will feature a state-of-the art training facility for the Washington Wizards and Washington Mystics and will also include a 4,200-seat arena which will become the new home of the Mystics and Go-Go. The facility is scheduled to open in the fall of 2018. Monumental Sports & Entertainment also co-owns and operates Monumental Sports Network (MSN) with the NBC Sports Group. MSN is the mid-Atlantic region’s top destination for exclusive fan experiences and original sports content across desktop, tablet, mobile, and OTT streaming devices. Visit www.monumentalsports.com.