Cindy Fisher, President of KETTLER, recognized as President of the Year at the Washington Business Journal's C-Suite Awards 2019 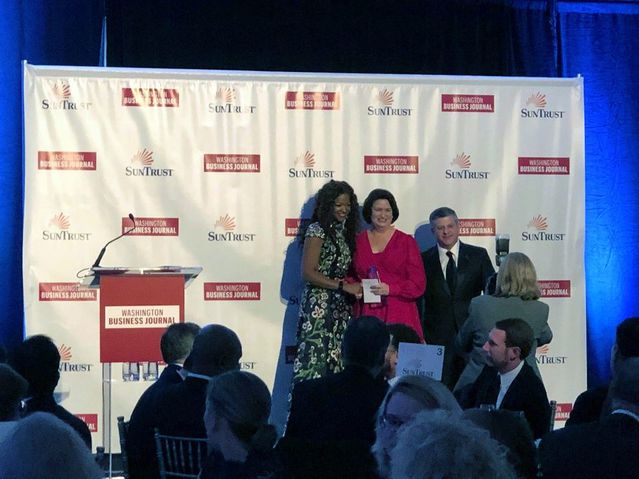 A year and a half ago, KETTLER Founder, Bob Kettler asked Cindy Fisher to step into the role of a Chief Operating Officer. She was tasked with helping the organization in the tail end of restructuring, from three business lines to one that emphasized multifamily acquisition and development.

Fisher helped the McLean real estate company weather a tumultuous few years, ones that saw the departure of some top executives, including her predecessor, Usha Chaudhary, and Asheel Shah, president, and chief investment officer of the multifamily division. Fisher overhauled the company’s internal operations and examined every part of its business, helping break down silos between the three previously independent operations, which she said handed off responsibility rather than collaborated. She didn’t have any IT experience, but she still helped restructure that department for Kettler to be more agile and self-sufficient.

Today, “We all work as a truly vertically integrated company,” said Fisher, who was recently promoted to full-time president.

Fisher gained her expertise in business operations from her former roles as a director at Freddie Mac and director of financial operations at The Washington Post, along with roles at The Pew Charitable Trusts and United Way of America.

Looking ahead, Fisher said she plans to help Bob Kettler build his business to be sustainable over generations, despite it being smaller than some of the nearby competition. Despite that, it’s been busy with 4.22 million square feet under construction last year with projects such as Tysons’ The Boro and the Vyne apartment community at One Loudoun. Now with 574 employees and $792 million in revenue in 2018, the company has been branching out in North Carolina and Florida real estate ventures.

“[Bob] views everybody in here as the family. There’s a culture you want to build,” she said. “To me, my role is to help embrace that and build that along with him, as well as make the business successful.”

What’s the most difficult part of your job? It’s a service industry where you are touching people’s lives and their homes. Things go wrong every day. You’ve got to be prepared for any number of things that are going to happen in your communities. At the same time, you’re trying to make sure you’re delivering the best services you can and balancing that with meeting your investors’ needs.

What are your goals for the company? Next year for me, customer experience is going to be a big focus — how to better use data. This industry is woefully behind in that area, and we’re all in that race because we all do work off fragmented systems and information sources.

One thing you cannot go without every day? Diet Coke and chocolate. I love chocolate, whether it’s dark or milk. I’m very inclusive with my chocolate.

What do you like to do outside the office? I love to do the extremes — either being on a mountain, skiing, or I want to be on the beach. I love to be outdoors. The last mountain I went to was Breckenridge and I go to Rehoboth all the time. It’s like my second home.

If you could have one superpower, what would it be? Time travel. I would want to go back to the ‘50s — I was born in the wrong generation. I think it was such a transformational time. It was a point in time in history where the whole entire country was changing.

What is the worst and best about working in the D.C. area?Commuting is the worst. The best thing — D.C. has so much to offer. You’re culturally around everything you could possibly be around. You have an amazing employee base. There’s just so many talented people that work here, so many industries that are here.

To view the published article on the Washington Business Journal: http://bit.ly/36HO6BJ